Stop the stigma. Get the facts. 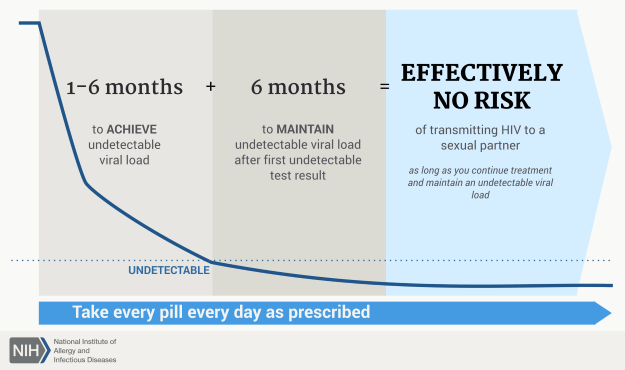 How often you undergo viral load testing depends on numerous factors. Talk with your HIV healthcare provider to determine the best schedule for you. Remember, the only way to know if you have achieved and are maintaining an undetectable level is to have regular viral load testing.

It is equally important to understand that all individuals living with HIV may not be able to obtain an undetectable viral load. This may be due to not having access to treatment due to transportation or insurance issues, side effects or intolerance to ART, or having other health conditions. Even if you cannot attain an undetectable level, your HIV healthcare provider may still encourage you to take ART, as there are health benefits associated with a lower viral load.

Why should you remain in care?

Barriers can impede your ability to remain in care. Some barriers may pertain to issues with housing, employment, transportation, insurance, and clinic office hours. Other barriers may be more personal, such as cultural beliefs, concerns about confidentiality, mental health issues, and substance use. If you are encountering barriers to care, contact us to see how we can help you.

Why is U=U important?

The implications of undetectable equals untransmittable (U=U) are far-reaching, as accurate and meaningful information about U=U can break down various barriers surrounding HIV. U=U plays a crucial role in reducing stigma. Dismantling stigma through awareness removes hesitancy in pursuing HIV testing and initiating treatment, as well as improving ART adherence. U=U also positively impacts the lives of people living with HIV, as it helps improve quality of life, relationships, reproduction, self-image, and overall health. Finally, a concerted effort working towards a common goal of understanding U=U offers an opportunity to impact the HIV epidemic.

Being undetectable does not mean:

Does U=U apply to non-sexual transmission of HIV?